A clear review of the updated pod vapesystem known as the Artery Pal SE 2 device is affordable and ideal for beginner vapers.

The original Pal SE Pod Vapekit was released. When it was introduced in the market, it had a mixed reaction from reviewers and the most important people who tried it. While most people were in love with the originals, some had leaking issues from the pod and other issues like not being impressed with the mouthpiece, while others found the draw to be very loose and experienced in muted flavor. You can get to learn more about the Pal SE 2 from this review.

The Pal SE Pod Kit comes in cardboard packaging, and on opening it, you will see a device with Carbon Fiber both at the front and the back. The device comes in several color/design options, including brown leather, black carbon fiber, royal white, and black leather. The leather version has leather inserts, and the royal white is just a white device with blue fused metallic panels.

The device is almost similar to the Caliburn though it has an extra weight due to the larger battery. It has a higher quality of Zinc Alloy construction, and its comfortable mouthpiece protrudes at the top of the device. The Zinc Alloy large round fire button is suited towards the top at the front of the insert, and below it is a LED battery status indicator. On both sides is a vertical slot cut out that works as a viewing window to see your juice level.

The Pal SE 2 comes with two pods, the pre-installed pod has a 1.0ohm coil with a Sea Grass Fiber Cotton, and another included pod has a 1.4ohm coil with similar wicking material. The resistance is usually marked on the same coils. However, the 1.0ohm pod has a Red band on the side of the bottom. The coils are fixed but not replaceable such that once the flavor has muted to the same point, it won’t be acceptable anymore (it differs from one person to another). The whole pod will then require replacement.

The pod is very clear, which is a pro, and the mouthpiece also gets pulled off to fill the pod as its top-fill easily. When you pull it off, you reveal the two fill ports, and if you look inside the mouthpiece, you will see the two protruding pieces that usually plug the ports when fitted. Additionally, the ports are vast for needle nose nozzles, and glass droppers can cause a problem. Either of the ports you use to fill air can escape from the other. The filling is usually a stress-free experience since you can see the level of juice inside the pod.

You will see the two contacts and the outer magnets from the base, and you can even see the 2mm air intake that is found towards the membrane switch. The pod can hold 2ml of e-liquid in both 1.0ohm and 1.4ohm and can also make it TPD compliant. Finally, on both sides of the pod are the protruding rails (one centrally on both sides) which slots nicely inside the cutout slots at the top of the device to form a viewing window.

Looking at the bay that the pod should be inserted, one can tell that it’s tidy. Visible are the inner contacts and outer magnets. The opening to the membrane switch comes with a raised rim such that if you get a leaky pod or any moisture, the liquid shouldn’t get inside the device. Also, you can see the vertical cutout from either side, which can form viewing windows with the pod inserted.

The pods nicely fit snapping into place securely when you compare with the Caliburn then you will notice some little play in the Pal SE. once it is fitted, a tug then pulls the pod out or fill press upon the top of the mouthpiece that loosens it, this can then be pulled completely off to allow filling without necessarily removing the pod. The viewing windows usually formed when the pod is inserted, usually larger than the Caliburn

The Pal SE can be used in two ways: it is a draw-activated device and comes with a physical fire button. The fire button can be clicked five times to turn on and five times to turn off, and to turn on is usually confirmed by the three green LED flashes, while when turned off, it’s usually confirmed by three red flashes.  The device doesn’t have adjustable airflow, and it’s a direct output device; thus, you should decide if you will use the device with a fire button and vape or with a draw activation.

The device has battery stators indicators that don’t have 4 or 5 stages. However, they are perfectly satisfactory and are indicated by the color of the LED light while a person is vaping. Generally above 60% the LED lights green, 30-60% the LED lights blue while if the battery is below 30%, it will light red. You can also confirm the status anytime by instantly pressing the fire button though you need to do it quickly since the device fires instantly. This device also uses the LED to show any safety protection that kicks in.

This device comes with a Type C USB port for charging that all vaping devices should now consider having, and also, a pro to this is the port is on the side of the device and not on the base. In addition to this, the 700mAh battery can charge from zero to full in a fraction of 45 minutes, and this is very impressive.

The final question “is Pal SE better than the Caliburn,” and the answer is an absolute yes. Another main question is about the evolution of the Pod and AIO devices plus the pod mods that have been all the rage. How relative is the Pal SEE currently? The answer to this majorly highly on what you are looking at in a device. 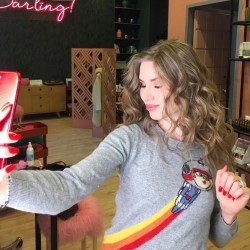 Ekaterina Mironova
Ekaterina Mironova is a co-founder of CBD Life Mag and an avid blogger on the Hemp, CBD and fashion subjects. Ekaterina is also on the panel of the CBD reviewers and she most enjoys CBD gummies. Ekaterina has developed a real interest in CBD products after she started taking CBD tincture oil to help her ease her anxiety that was part-and-parcel of her quick-paced city career. When Ekaterina realised just how effective CBD is, she has founded CBD Life Magazine along with some of her friends.

When she is not blogging, you are likely to see Ekaterina in front of her souped up Alienware laptop gaming or delving into the world of Cryptocurrency. Ekaterina also boasts a very large collection of Penny Black Posts stamps and silver hammered Medieval coins. Ekaterina's other interest include swimming, painting, traveling, shopping, spending a good time with her friends and helping animals in need.

Ekaterina has featured in some of the leading publications such as Vanity Fair, Country Living, Vogue, Elle, New York Times and others.